This is the (French country) life! 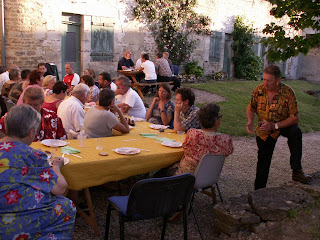 You can picture the scene; Rick Stein (or a similarly affable francophile foodie) hops off his barge as it ambles along the Canal du Midi (or hops out of his 2CV which has perambulated its way up the drive of an old farmhouse in the Dordogne) and finds himself an impromptu invité as an extended family or group of old friends (preferably wine growers) share a celebratory meal. Have you ever wished you had a bit-part in that scene? Or even better than acting it out, have you ever wished that this sort of thing was part of life, even if it was only on high days and holidays?

As I watched that sort of place-in-the-sun-foodie-in-france sort of tele before we moved, I always wanted that bit-part, but didn’t think it was real life.

But last Saturday Jonathan and I took our places at one of the long trestle tables laid out in the late afternoon sunshine in the garden at the back of the ‘Tour Auditoire’ in
Posted by Sarah G at 11:31 AM 145 comments:

Switched on to the Seasons 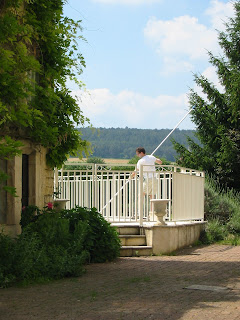 A glass of white wine by the pool this week, watching the swallows swooping overhead and listening to them chatting to each other on the tv aerial, prompted some reflection on how much closer we are to the seasons than we were in our previous existence. OK, so Godalming station was much more pleasant at 07:23 once the clocks had gone forward, and we did enjoy the odd evening meal outside if we got home in time, but enjoying the summer and moaning about the grizzly winter was about as close as our lives got to the changing seasons.

Now we’re ending our third year here in southern , where even the local newspaper follows the seasonal rhythm, it's impossible not to be completely tuned in to the seasons. Even Jonathan, who’s desk-bound five days a week, is driven by the changing seasons. From about October, his main job (apart from the gainful employment, of course) is making sure there’s enough chopped wood on hand to keep the stoves stoked up. Off and on during the summer he cuts the wood which is delivered to us in metre lengths but the main effort is from Autumn to early Spring when he spends quite a bit of time lugging logs about to make sure the baskets by the stoves are loaded.

This week, though, as if by magic, the seasons flipped when the ‘piscinistes’ came to open the pool for the summer. Now Jonathan’s in pool mode. That means his main job until sometime in late September or early October (apart from solving his clients’ database problems, of course!) is making sure the pool is crystal clear, chemically balanced and free of nasty floaty things like bits of leaf or dead spiders.

This seasonal demarcation is a bit more complicated now the new wood boiler is heating our hot water all year round, requiring a load of logs every three or four days and meaning wood duty carries on all year. However, he’s definitely in pool mode now and is very excited that the recently-installed solar panels have already got the water temperature up to 19 degrees.

As for me, the chief washer woman, cook and gardener, I’ve always got at least one eye what’s going on outside. The first sign of spring is probably Circé’s fur starting to come out in handfuls and then once the clocks go forward the days are long enough to dry at least three loads of washing outside (provided it’s not raining of course).

Here in even the most Tesco-like supermarkets don’t sell strawberries in February so it’s not difficult to develop a deeper understanding of what’s in season when, even if you don’t have your own vegetable garden. Since the end of April, and hopefully for a few more weeks yet, we can buy local asparagus from a farm a couple of kilometres away and it really won’t be long before I’m buying trays of fresh peaches, grown in the south of France, from my favourite fruit and veg shop.

Next week we reach the days of the three ‘Saints de glace’ , one of whom, coincidentally, is Saint Pancras. This marks a real milestone in the calendar of French gardeners north of the . After these days, the 11th, 12th and 13th of May, the story goes that anything planted out in the garden or the veg plot will be safe from frost. Everyone here who grows their own veg, me included, will then be off the blocks and racing to get everything planted. I can’t wait, as it’s standing room only in the greenhouse at the moment!

Until yesterday no museum featured in my list of favourite special places. My list does include a restaurant (Greens in San Francisco) , a stretch of road (the D6 between Maranville and Cirfontaines - at the moment this lovely curve around the local contours doesn't have a website), a house (Gerbestone Manor in Somerset), a garden (East Ruston Old Vicarage gardens in Norfolk) and a bookshop (Shakespeare and Co in Paris). But up to now there’s not been a museum. Until yesterday, that is, when we went to the new Charles de Gaulle Memorial museum in Columbey-les-Deux-Eglises, just a stone’s throw from home.

Mind you, this is no ordinary museum.

We’d been watching from afar for some time as this amazing building forced its way through the hillside, as on clear days we can see the site on our usual walk with Circé. However, it’s only when you get close to it that you’re struck with just what an achievement it was to construct and complete this amazing building and the exhibition it houses in just two years.

As we took the lift from the back of the limestone-lined entrance cathedral, we felt as if we were being elevated into the heavens through a backdrop of tiny twinkling blue lights. Then, like a scene in a science fiction novel the lift doors opened onto a small landing and an ignominious black door. Were we meant to go in, or had we been lifted too high?

We opened this door not so much into another world, but a familiar one; the landscape we love so much, the rolling hills, dramatic horizons and deep forests of our corner of Haute-Marne.

‘Chapeau’ to the exhibition’s designers who took us from beauty of the Haute-Marne countryside and back again via the trenches of the first world war, the north African desert and the streets of 1968 Paris.

What’s so clever is the detail which brings the man to life; not just the usual family photographs and extracts from letters, although there are plenty of those, but things like the opened trunk full of the necessities of itinerant life – with a detailed narrative to go with it so you know why among the dress-suits and military documents there’s a boiled egg and a thermometer.

Unsurprisingly, I was enthralled by the section on communications - the importance of radio and the role the BBC played in the drama, the underground newspapers and the people who put them together, the huge challenge of rallying the hopes of the oppressed French nation around someone who was, for the most part, completely unknown. Most people didn’t even know what Charles de Gaulle looked like. This makes my old job seem like a piece of cake!

By this stage of the journey I was used to being surprised and delighted so instinctively looked up after learning how de Gaulle’s sister-in-law and niece took huge risks to tackle this problem. And what was there but a 1940’s Parisian living room complete with sideboard and dining table suspended upside down above my head!

And through all this the landscape on the other side of the giant’s letter-box windows of this fantastic building is woven into the fabric of the story, whether it be a glimpse through a gate behind a pile of postbags or through the windows of a reconstruction of de Gaulle’s study.

And this was the best for me – how much the beauty and drama of the countryside I now call home was the central theme of the story. We were told at the beginning of that de Gaulle picked Haute-Marne as his home because its grandeur and austerity matched his personality. In a strange way, and I make no apologies for how this sounds, it gave me a kind of connection with him, knowing there’s something so fundamental we share – a deep love and admiration for this little-known corner of France.

It was so wet and horrible yesterday that we didn't bother to take the camera - thinking that we wouldn't be able to take pictures inside. However, photography is allowed and there's a brilliant Flickr set here. Joseph Melin has captured the essence of the place far better than I could ever hope to. 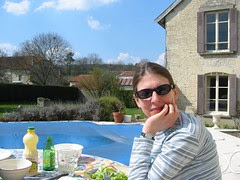 Much better than sitting in an office all day!

This is a Flickr badge showing public photos from Redleaves. Make your own badge here.